GunDoll and I dropped by the Rocky Mountain Gun Show (RMGS) in Sandy on February 28th. The show was held in the South Towne Expo Center where it filled a significantly less amount of space than the Crossroads of the West gun shows in the same expo. Quite a few of the vendors are the same and the general feel of the show is the same. There was a booth selling RMGS specific t-shirts.

The RMGS experience is mostly different in the amount of people handing out flyers and soliciting money for charities. Two flyers to the ticket booth, a ticket master that mumbled (this is ok with me actually, I don’t feel about customer service the way some do), and before we got to the first booth we were asked to donate to two charities.

The south wall was lined with five ton trucks, some in original style paint and some fitted as über camping trucks in dark gray with ladders and a tent on the roof. The trucks belong to the seller Plan B Supply, with locations in Utah, Nevada, and California. They specialize in 6×6, 939 series trucks (Wiki). I prefer the 2½ ton trucks like the M292 expandable van or traditional M35 (Wiki) for a more practical size. Even then, fuel economy aside, its hard to find a place to park it. 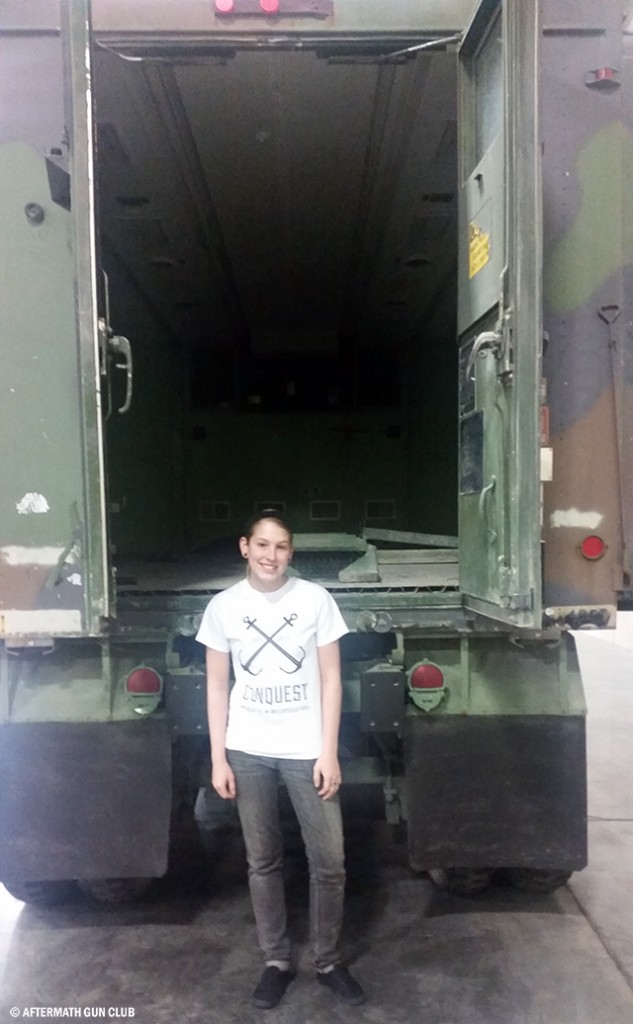 I haven’t seen one of these in person before, it proved to be unwieldy and we suspect a problem with the rifle to shotgun switch on this particular model. This 5.56mm and 12ga weapon was designed by Crossfire and engineered by SACO as the MK1. We gave it its own page if you’d like to know more. 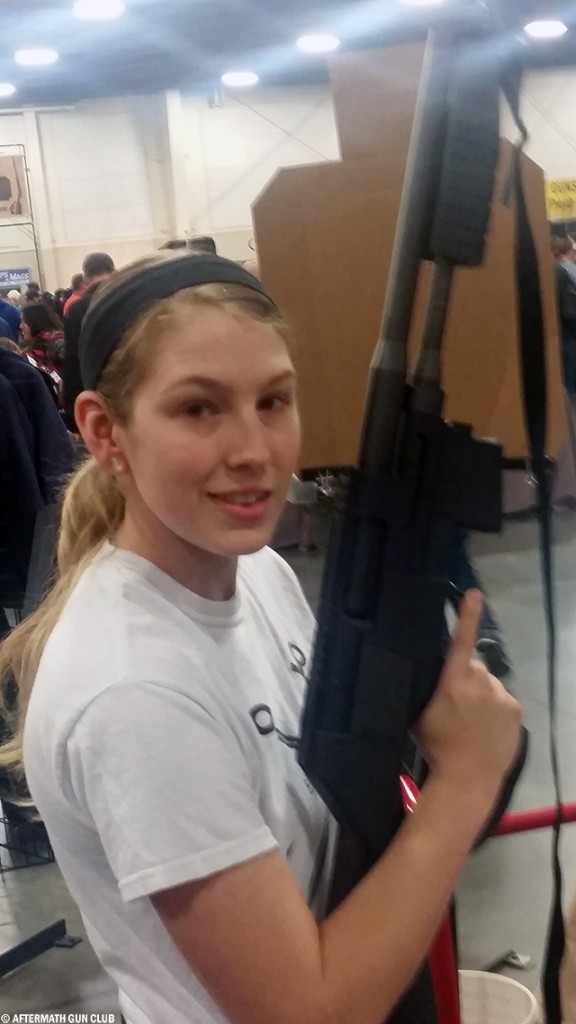 I think the hubris behind branding a company as Quality Arms is asking for taunting – though our initial impressions improved as we looked this .45 over. I liked the camo frame finish but the magwell flare extending on the front strap would take some getting used to. For all our combined knowledge on 1911’s, we didn’t spend much time giving it a more thorough inspection (i.e. we have no official opinion on the firearm). My take is the handgun suffers from an identity crisis somewhere between being a duty gun and an entry level race gun. QA is known for their AR15’s and their limited number of 1911’s have sold under $1000 with some custom features.

These 1911s have smooth triggers and impeccable balance and come with the custom features that serious shooters demand. This single-action handgun features a flared magazine well, an extended beavertail safety, front and rear cocking serrations, checkered rubber grips, a skeletonized hammer, and Novak-style low-profile sights. Its grips, metal, and bore are all in very good condition. 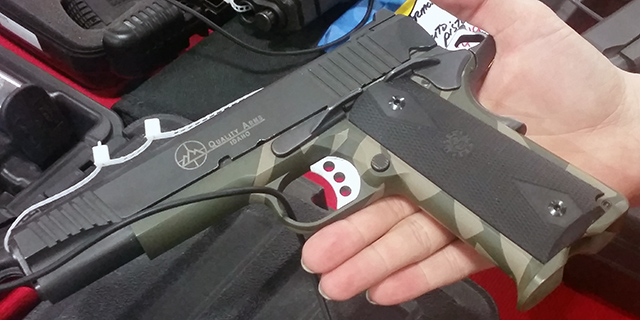 Making the assumption that people generally blindly turn right at a fork, we walked in a spiral starting along the outside edge and wrapping inwards. This worked well today as we never were against the flow of traffic. I picked up some much neded small AR15 parts. We found someone selling jam or ketchup or face cream or we didn’t really pay attention. There were few booths like this, something that plagued local gun shows in years past.

We found Federal Auto Match .22LR selling for $40 for a standard box 325 rounds. While they don’t get stocked for sale daily, local stores and Midway USA sells the same box for under $17 if the buyer is patient. If the buyer isn’t, the ammo can be found on local classifieds for about $25.

Estul Twist-2 Derringers sell for around $150.

A C.Sharps Pepperbox was in a glass case and the gentleman was more than happy to show it. 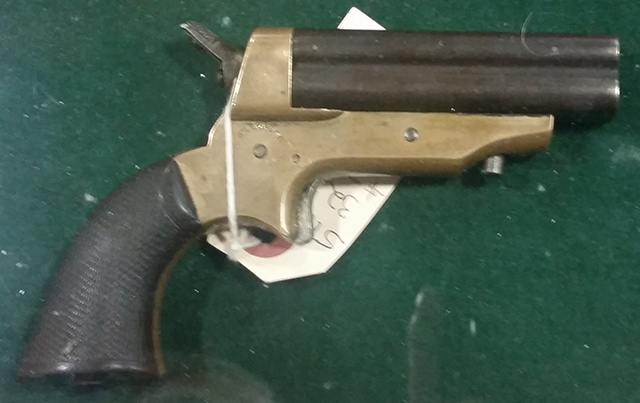 These brass four-barrel handguns are common enough to not break the bank, but in the $750 range like this one, they aren’t going to be collected by the casual enthusiast. 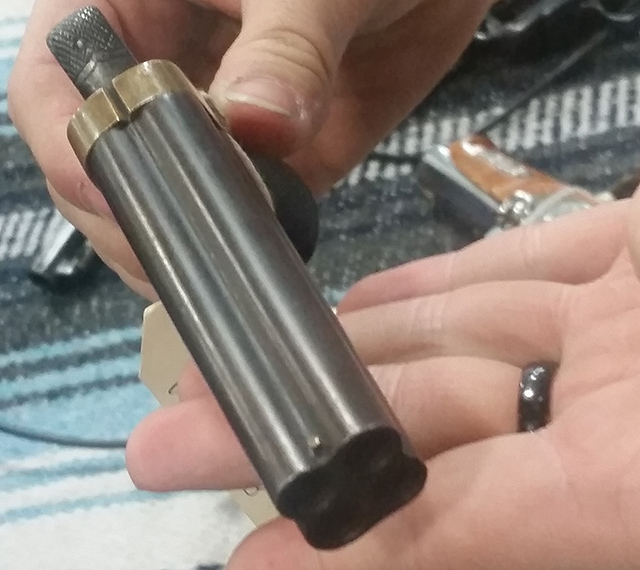 It is only recently that I’ve return to visiting such expos. After working on the other side of the table, show after show, I had no interest in visiting as a spectator. My last official show was working with Mike Pappas – we didn’t bring anything for sale. We setup a few machine guns, including an M60 on its bipod, and we just fielded questions on how to legally purchase transferable machine guns. That’s all we did for the entirety of the day. Within 60 days we didn’t have any machine guns left in the shop to sell, save for a registered trigger pack and an accompanying Steyr AUG-A1 with a missing piston, so I assume the day was fruitful.

This year we plan to stop by every local gun show to try to get a comparison of each. Our end goal is to be able to recommend which show is the most worth the time for those not as involved in gun culture.