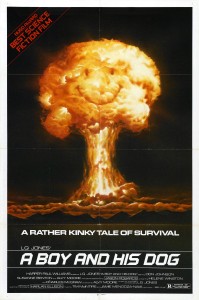 This movie is a comedy. It stars a young boy named Vic (Don Johnson) who roams the wilderness with his dog. Vic has a telepathic link to his dog, Blood. Of the two main characters, the dog is the smarter one, yet he helps Vic navigate the post-apocalyptic world. Vic’s main goal is to find food and get sex, not necessarily in that order. His dog helps him locate females.

I really enjoyed this movie and found myself laughing at some of the funnier parts. The idea of a telepathic dog is outstanding and Harlan Ellison who wrote the short story that this movie is based on really knows how to create a good science fiction story. This particular tale is about love and friendship in a desolate world.

Sometimes this movie is a little bit cheesy but I think it’s because it was filmed in the 1970’s. I found that I really preferred Blood. He was my favorite character. We could all use telepathic pets but maybe not all of the time, as I think it would have to depend on what kind of animal it was.

I wouldn’t want to spoil the ending but I will say that the love between a boy and his dog is very touching.

IMDB | IMDB also shows a potential 2015 release for a remake.

A better (fan made) trailer