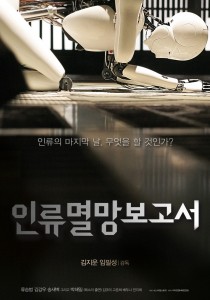 This is a movie with three story lines or chapters. The chapter is of a Zombie apocalypse in Korea. This story felt fairly genuine as the virus unfolded, simply because I was reminded of the bird and swine flu epidemics.  The spread of the virus is blamed on the North Koreans. I think I enjoyed this section of the movie the most as it was the most coherent and felt the most realistic. Truly what is the difference between the spread of a zombie virus and the avian flu?

In all honesty, the second chapter about a robot achieving enlightenment and becoming Buddha was very boring and not apocalyptic at all. I was disturbed by the blatant similarities between the robot in this movie and the one in I, Robot with Will Smith. As well, as the fact that the actors were trying very hard to be emotionally connected to the robot but it just didn’t work for me.  There isn’t enough time to get the audience to really identify with the robot or the humans.

The last story veers back toward the “end of the world”. I won’t say a lot because there isn’t much to say. A little girl’s misguided internet order brings doom to the planet. I wanted to like this, but it was trying to be serious, when I found it laughable. The characters were flat and unentertaining. The best part was when the newscaster they were watching on T.V. was verbally denounced by his co-anchor when there were only minutes left on the clock before the catastrophe was set to occur.

If I had to go back in time, I’d only watch the first third of this movie, as it’s really the only one that truly fits under the title “Doomsday” unless of course you think that robots reaching Nirvana count as a sign that the world is ending?