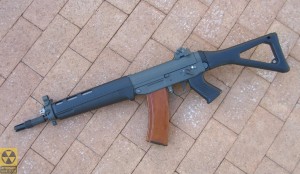 A friend of mine built a SIG556, with as many Swiss parts as 922(r) will allow, custom chambered in 5.45x39mm. This firearm started as a SG551 demilled parts kit and a SIG556 stripped receiver. Installing the unused East German MPiAK-74N (AK-74) chrome-lined barrel wasn’t a complicated install but the lower mag catch assembly had to be lowered by .300 and the magwell had to be opened for the unmodified AK-74 magazine. However, it wasn’t that simple, the lower required a lot of time to align the parts correctly, much of it necessitating the tedious fit and feel method.

After removing the Picatinny rail, the mounting holes were filled. The original SG551 Swiss SIG rear sight was removed from the receiver stub, of the parts kit, and welded where the USA type rail had been removed. The new Swiss Arms SG551 models also have an optional 1913 rail but this rifle maintains that classic look of the original SIG SG551 series of rifles. My opinion is that the use of line is much more aesthetically enjoyable in this configuration.

The small details are remarkable: Flip-up front night-sight with full enclosure, upper receiver caliber remarking, refinishing in Cerakote with a re-riveted charging handle wipe (the plastic dust covers rear of the ejection port), black Swiss LE/military furniture, including the pistol grip with rubber trap door, the Swiss v-notch in the front of the receiver for installation of the original quick connect scope mount, and filling in the Swiss crest on the top of the receiver.

The original Swiss handguard features cooling vents showing off the gas tube. While looking nicer and keeping the overall presentation more European, it does come with its troubles. Molded into the gas block, the Swiss version includes a millimeter thick heating insulator pad, which protects the handguards from melting. Insulator shims would be nice for retro SG55x builders to eliminate some of the front-to-back looseness in the handguards.

The barrel is a 14.5 inch with a permanently attached Smith Enterprise/Ops Inc. suppressor mount, the suppressor is an Ops Inc. 14th Model CQB MBS.

There is something about this build that made me start blasphemously wanting a SIG P210 re-chambered in 7.62x25mm. 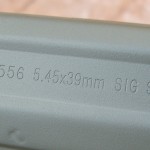 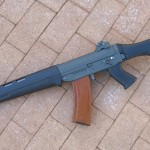 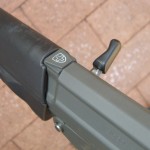 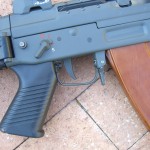 As my well accomplished pistol marksman friend Rachel would say, “I covet.”