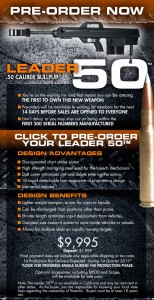 Australian firearm designer Charles St. George isn’t new on the defense scene. His most well known production firearm would be the Bushmaster M17S bullpup, albeit slightly altered from his original design. He was also behind the Leader Dynamics T2 Mk.5, an Australian re-deux of the ArmaLite AR-18 type. Most of us didn’t even notice the T2 Mk.5’s casual appearance in the first Matrix movie.

He also worked on a few bullpup prototype designs in the early stages of development of a modern assault rifle. As a designer he has been involved with Australian Automatic Arms, Leader Dynamics, Armtech, Bushmaster, and Sabre Defence.

Not too long ago he designed a bullpup, utilizing the .50 BMG  cartridge, set to be manufactured by Sabre Defence. Sabre was a quality manufactured that underwent multiple troubles with the authorities until their demise. Sabre was a great choice for manufacture as they had experience with the M4 platform, complete with a US military contract, as well as manufacturing the semi-auto variant of the Steyr AUG A3 for the American market. 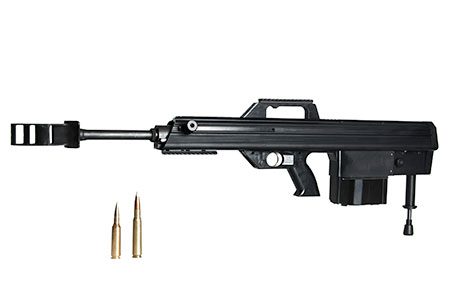 With Sabre closed the Leader-50 hasn’t disappeared into purgatory with the MSAR Archangel and Monolith Arms P-12. In fact, the firearm is so close to production the pre-orders are now available from the new manufacturer MICOR Defense. If you are interested you will need to signup on the waiting list. MSRP for the pre-orders is $9,995 with a deposit of $1,999.

I am sincerely pleased to see this firearm come to the market and hope sales are adequate enough for MICOR and Charles to bring more firearms to production. However, it has some steep competition with Desert Tactical & Barrett. I anticipate, like the Steyr HS.50 or Accuracy International, this will be a rifle I won’t often see on the range.

I expect to have more information on this new rifle soon. Any and all corrections are appreciated.