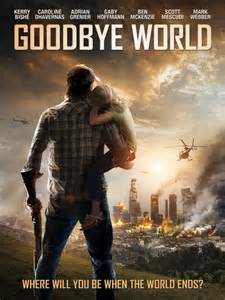 “Don’t ruin my high with your dirty apocalyptic ways!”

This movie was not as apocalyptic as you would think, though it was billed as such. Premise: Cyber-attack by terrorists who take down the grid by overwhelming servers with a virus. But I’m getting ahead of myself.

Lily (Kerry Bishé) and James (Adrian Grenier) along with their little girl live off the grid in a self-sustaining cabin in the middle of practically nowhere (Northern Cali).

They hang out all day doing hippie stuff. Then you meet some of their friends from college days because as the world crashes all their friends head to the cabin where James and Lily are set-up for the end of the world. (Here’s a hint but maybe you should not tell everyone where you’re hideout is. Just sayin’.)

There is an old flame, Nick (Ben McKenzie) that is still in love with Lily and his crazy stuffed animal loving wife Becky (Caroline Dhavernas). The revolutionary Benji (Mark Webber), who went to prison for being an Activist and destroying other peoples’ stuff. He brings along his one night stand (Ariel) from his college speaking tour. He didn’t just show up uninvited though as he lives in the guest house.

Lev (Scott Mescudi) who does not kill himself in his apartment at the beginning of the film when you think he was going to, but neither did he bother to drink any water for his trek to the cabin and shows up in a hallucinatory state. (Maybe he was opting for a long drawn out death instead of the quick one with the gun?) Finally, there is Laura (Gaby Shepherd) who was a senators’ aide in a Monica Lewinski-style kind of way.

All the main characters converge at the cabin and they start smoking pot and having parties. Seriously, they are growing pot in the back so no worries about running low on that.

Martial law is declared and the neighbors take in the army men that come by to the Hippie Paradise first but the hippies turn them away. (Hi, we’re from the army and we heard you are all set up for this apocalypse and were wondering if we can chill here with you guys? No? Okay then, we’ll just go away and find another place even though we have guns and can just take what we want.)

Honestly, the climatic confrontation between the soldiers and the college chums doesn’t really make you worried for anyone at all. But since we live in their apocalyptic world, maybe the desire to survive above all else is subjugated and takes second place to concepts of courtesy.

At this point the hippies have something they want to say about this movie review: “Hey! This is our love-in version of an apocalypse and everybody is nicer. Sorry that you guys end up with all those shitty horrible apocalypses where everyone is fighting just to stay alive! How is that our fault? Now we’re going back to drink our wine, have some nice pot and satisfy our munchies with all our organic gourmet foodstuffs. And don’t bother coming back because we are going to be naked in the hot tub and it’ll be awkward for everyone if you show up all sick and in need of our vast supply of pharmaceuticals. ”

While the neighbors and the rest of the townspeople are trying to take care of all the people who didn’t prepare, the self-indulgent friends are re-living old times. Nostalgia rules as they discuss both the good and the bad and have their squabbles about who really has made a better life for themselves. The guy with the stuffed animal obsessed wife makes a play for his old fiancé turned marijuana hostess. His wife Becky in turn steals back the giant teddy bear that she brought as a present for the little girl (Spoiler alert Becky releases the teddy bear into the wild so it will not be mistreated anymore by the kid.)

Here’s a personal opinion that I’m going to just put out there as dogma; “Nothing says I really hate you and don’t care about you at all like a giant stuffed animal of any variety that has to now be looked after.”

I don’t want to take care of and store a fake animal. It doesn’t fit in the bed, it takes up closet space. It’s quite possibly one of the all-time worst presents you can give to anyone. You have been warned. A giant stuffed bear IS NOT a real present.

This obsession with unreal insignificant things reminds me of one of the best interactions from the movie:

James: “How do you want me to respond? I’m dealing with real problems.”

Lily: “And our marriage isn’t a real problem?”

James: “Not compared to our survival, no.”

At least James kind of gets it. He’s the one with half a brain that’s like; “Hey we could run out of food sometime etc., maybe we should take this a bit more seriously. Let’s be real about this.”

I guess when you aren’t affected by the burning of the world because you live in your pot paradise, you can be more concerned with relationships than with making sure you have enough yummies for your pot cravings.

All good things must come to an end though, Benji pissed off his one night stand, Ariel and she’s sick of everyone acting better than her because they were all friends from before so she runs off to the neighbors down the hill. The ones that allowed the soldiers to stay with them.

A few times the neighbors have come asking for help and they got turned away with very little help. Of course Ariel tells everyone about the paradise on the hill with all the stuff that they need.

The soldiers come back and demand the antibiotics and a bunch of their other stuff. “Hey, we want some wine too!” And they threaten everyone.

James gets mad and goes to confront them, unarmed, because it’s the way you do things.

He nearly gets killed but the Senators’ aide Laura, saves him by killing one of the soldiers and giving a speech. Then everyone makes peace and agrees to get along.

Near the end you find out that Lev was going to kill himself and had created a text that said “Goodbye World” and sent it to everyone’s cell phone as his suicide note, and he’d also created the program that the terrorists used to destroy the grid. They were only lacking a key part to it, as he’d quit before the project was done. Lily hacked Lev’s computer and allowed the cyber terrorists who were watching to steal the key that they then used to send the virus that attacked everything and brought it to a screeching halt.

Um, so you’re telling me that these pot smoking college chums destroyed the world? Yes. Yes I am. But it’s okay because the apocalypse is nice. It’s easy and everyone will get along at least as long as you aren’t in a city and you have lots of pot. No need for guns or barricades. We have a top of the line apocalypse here, not the uncivilized kind.