Yesterday the wrong MSRP for the new Galil ACE Pistol was released as $2,149, $150 greater than the standard Tavor SAR bullpup. The correct price is $1,749.00. This resulted in a lot of emails and phone calls to IWI. An updated press release was issued three hours later.

The Galil ACE pistol will have a folding stock adapter offered in the future, for those interested in converting the pistol to an SBR. 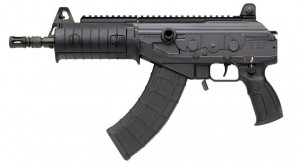 I called IWI myself yesterday, but not about the Galil. At SHOT Show 2014 I asked about the Ace and was given a wink, when I asked why the Uzi pistol had disappeared since the 2013 lineup a year previously, I was told about the issues with the trigger and the pistol not wanting to stay entirely tame. This has now been resolved and the Uzi Pro pistols will be coming into the United States as early as February or March of next year. Shortly after a version with a folding IWI brand stabilizing brace will be offered.

Lastly, while news is out the Steyr AUG 9mm kits have been banned, the Tavor 9mm conversions have not been. They are fully 922(r) compliant while retaining an Israeli made barrel and bolt.