The synopsis is that everyone is dead except for three people, a socially awkward anthropology student named Alan, a beautiful woman named Sarah, and a handsome but less than brilliant man named Raphael. Apparently they were all taking their Zinc supplements faithfully so they survived. Everyone else has died from some unknown disease but the stores and all building structures etc. are still intact. This allows the 3 survivors to be able to just go “shopping” wherever they want for whatever needs, or wants that they have. 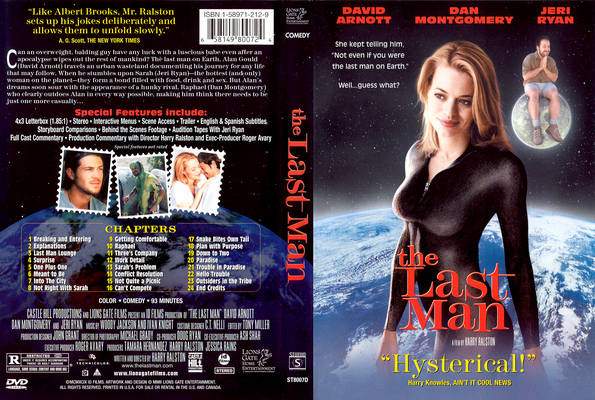 The cover suggestion a Star Trek version of Jeri Ryan that does not exist in this movie. She is merely 2 of 3.

Alan is pretty much the narrator for the entire movie. He is still continuing on with his anthropology research and documenting his ideas for the future inhabitants of the earth, who will someday hopefully find his tape and learn from him. In the first place, the idea that he should be the expert on humanity is a little ludicrous, but I guess because he is the only person left that would automatically make him an expert.  But I have to wonder if being the only person left should really equal being the most intelligent person. If we use circular logic then yes he is intelligent. He’s more intelligent than both Sarah and Raphael, but he is definitely lacking the ability to interact with people in a kind and decent manner. As soon as he feels that his “perfect relationship” with Sarah is threatened by the appearance of the more sexually attractive man, he quickly descends into behaviors of lying, manipulation and voyeurism to try to obtain an edge over Raphael.

I want to continue on about Alan, but I also want to take a tangent here into the interesting fact that the more attractive man is named Raphael.  In Islam the angel Raphael is supposed to blow his horn to signal the Last Day.  Raphael is also regarded as the patron of travelers, happy meetings and matchmakers. And the angel Raphael is often portrayed as a young man carrying a staff. All of these things, plus the fact that he saves Sarah from the apparent irrevocable outcome of having to be with Alan because he is the last man on earth, makes him stand out as almost otherworldly and a savior, though this Raphael is no angel. He does have a drug habit, and tells a few tall tales.
Sarah doesn’t care though as she is no longer limited to the default choice of just the one guy.

Alan, of course, does not welcome the signalling of the end of what he thought was the perfect setup. He even tries to drive past Raphael who is hitchhiking, hoping to prevent Sarah from seeing the new guy. Alan’s behavior rapidly descends from this point. Even though Alan keeps telling the video camera that he has no attachments and that he is beyond petty desires etc. just like the tribe of Indians that he had been studying, it becomes apparent however, that he is very self-centered and only wants what is best for him.

He becomes jealous and when he realizes that there is no way he can compete with Raphael based on looks, he turns to sabotage. He is smarter than Raphael so he does actually chase Raphael away by tacit behaviors that lead to a break-up between Raphael and Sarah. At this point Alan has apparently won. He has the girl. He however doesn’t seem to enjoy all of the attention from her. She behaves clingy towards him which is normal given the fact that the guy she really loves has left and that there is a definite fear that she has of being alone. There is no one left in the world, ergo she is more clingy than the average woman would be. Still instead of trying to understand her and deal with her in a nice way. He continually discounts her and remains self-absorbed. He has her but he still complains to the video camera that he can’t stand her actions.

When Raphael returns, I figured Alan would be happy to step back and feel that he has been saved the trouble of dealing with the clingy, annoying woman. Not a chance. He immediately gets angry just like the child that has a toy he never plays with until someone else wants to play with it. Sarah becomes important to him again. It’s too late though. He’s acted like a jerk to her, and she’s happy to have the nicer guy back.

Alan does finally end his video tape documentary with a message about being decent to people but it’s hardly believable that he’s really learned from his lesson. I experienced a range of emotions about Alan during the movie. At first I felt really bad for him when Sarah didn’t take to him at first. He seemed to really want to have her like him. Even when Raphael appeared, I felt bad for him. I knew what was going to happen. Guys like Alan generally don’t get the girl. However the more I watched him become, or maybe just reveal how horrible a person he was I didn’t feel as badly for him, and by the end I was glad to see Raphael return.

I wonder if the movie could’ve been much different if the woman could’ve had a real choice between two different but equally nice guys. Maybe that kind of story wouldn’t work. We all like conflict and drama, I guess. I am reminded of the movie Paint Your Wagon where two men are also fighting over a woman, when there is a shortage of women. Even this group of people weren’t able to achieve a compromise. Both of the men were nicer and really cared for the woman, but in the end the dynamics of the complicated relationship involving three people didn’t work. Eventually there was a pairing off.

I could probably continue on about the ins and outs of dating, relationships and mate selection but I will just end with this.
If you’ve got the best genetics, chances are you’ll get the mate that you want. Maybe ragweed allergies aren’t a good thing in this post apocalyptic world Alan! And for the rest of us, If you find yourself surviving an apocalypse and the male to female ratios are off in either direction, please remember not to be a prick!