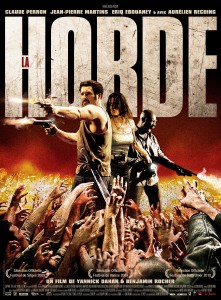 First there were zombie movies like Dawn of the Dead when zombies weren’t as popular, then over the last decade zombies became “the New Black” of storytelling. Now zombie movies are everywhere and being produced in just about every country. There are Cuban Zombies, Korean Zombies, Russian Zombies, French Zombies?!?!? You heard right; French Zombies.

The Horde is about average on the gory scale as far as zombie movies are concerned. The premise is that a group of cops are headed to the ghettos to take revenge on a gang that killed one of their fellow officers and kidnapped another one. The political diatribe of this movie isn’t very subtle and in some ways it is justified. The Z.U.P. (Zone a Urbaniser de priorite) or the suburbs were a great idea in theory when they were first built, and there are some in every major city in France. Group housing for everyone that needed it, centralized and readily accessible to major commercial areas. But the buildings decline and fall into disrepair and the foreigners are the only ones who can’t afford to move out. The balance veers toward lower income families. Gangs start to flourish and the cops and government start to ignore the area.

I’ve been in the same kind of buildings that appear in this film, and they are just as bad as they appear in this film. Minus the zombies of course.
I recently watched another film franchise that dealt with the socio-economic problems of the “Banlieues”. District B13 and District 13: Ultimatum, both of these films also served to highlight the socio-economic problem of the ghettos.

The building in this movie is going to be torn down in the near yet undetermined future and most of the residents have moved out save the few who can’t afford to move on. The police sneak in and ready themselves to attack the gang members. They run into the gun toting Super who is still trying to keep things under control. They tell the manager to take a hike and they proceed to rig the door of the gang’s hideout with explosives but the Super comes back and tries to help the cops, only he alerts the gang to the presence of the cops. The cops are taken hostage and are going to be killed but then the zombies start attacking. The rest of the movie the cops and the gang members try to cooperate with each other in order to avoid the attacking zombies.

As I watched this movie I kept thinking of all the times that the elevator wasn’t working in the buildings I’d been in. Not to mention how many times I opted for the stairs when the elevator seemed a riskier choice. The hall lights that were on a timer. “Can I make it to that persons’ door before the lights go out?” becomes a normal, everyday question when you visit one of the buildings in the Z.U.P. Then there is the lovely stench of urine soaked stairwells. Not to mention all the French swear words I picked up by reading the graffiti on the walls. It’s seems highly unlikely that the set designer had to do very much to this building in order to make it into a slum. Chances are very high that there was a building that was ready made.

All of these aforementioned memories and plenty of others made the viewing experience very kinesthetic for me personally, and thus a bit more uncomfortable in nature. It was easy for me to see myself being chased through the poorly lit hallways by zombies. Though the zombies themselves weren’t any scarier than most.

If I lived there, I think I could escape the zombies as long as I didn’t try to take the elevator. The real horror of this movie is the fact that there are real people who have to live in buildings just like that one. In the end the characters of the movie don’t escape the horde of zombies. Hmm, that sounds familiar. It’s like the way life is for most of the people who live in those buildings. No escape!