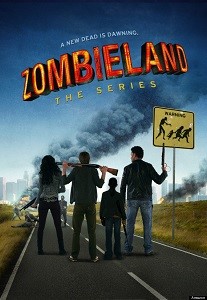 IMDB users have thus far rated the show 5.7/10, YouTube users are bashing it, Facebook commentators are mostly giving a “meh” to the trailer. I’ll give it a full 6/10. The overall presentation is a percentage of the original movie, but it isn’t mediocre. At first the humor seemed forced and delivered with predictable lines but it improves as each character begins to fill their roles.

I suggest giving it a chance, if you are a fan of the zombie comedy original.

My big complaint, is everyone’s complaint, the actors are different. For me, the solution was simple, change the names of the characters. The actors, writers, and performances are then free to evolve on their own, even if based on the original four characters. Trying to convince us they are the same characters will put a lot more pressure, on everyone involved, to fill those shoes. Whereas changing the names would allow a movie sequel to be made with the original cast, both casts, or a mixture thereof.

Although I enjoyed the film, the original movie wasn’t a classic work of art, and the original cast wasn’t stellar to begin with. Abigail Breslin is replaced by Izabela Vidovic (as Little Rock) and this is a vast improvement. It’s not personal. Abigail really annoyed me in the original movie, it’s not her, it’s me. I’m the problem, I’m the reason I found her so obnoxious.

Kirk Ward (the crazy body double from Invasion Iowa) replaces Tallahassee and once I warmed to the new actor I enjoyed the show.

My second issue was with the trigger discipline, which was atrocious. Lastly, the entire episode was predictable and I somehow guessed the plot without knowing it in advance. Lucky. However, I still laughed, though my friend Vicki says I didn’t actually. Not out loud.

I didn’t find a trailer I could embed but I did find the complete video instead, until it is deleted. You can of course watch the video for free on Amazon’s website here.