Like Barrett and Black Hills Ammunition before them, J&G has announced, via email, they will treat government and civilian sales equally:

As state and local jurisdictions are increasingly passing laws which infringe upon the Second Amendment of the US Constitution, J&G Sales is implementing a new policy on shipping restricted items to these states and localities.

Effective immediately, laws that restrict firearms, ammunition, or magazine possession by law abiding citizens will also be applied to state and local law enforcement and government agencies in that jurisdiction. All residents will be treated equally. Honorable citizens, law enforcement personnel, and government agents, should all be allowed to utilize the most effective defensive equipment available.

J&G believes that there should not be a difference between the rights of citizens and those of government employees. This new policy will also help us to be sure we avoid the consequences of not conforming with the anti-firearm regulations in these various jurisdictions.

We expect to lose some revenue from government purchases, however we feel it is essential to defend the US Constitution by making a statement about the importance of the Second Amendment in maintaining our freedoms.

We await the day when all law abiding citizens will be able to possess the most effective means and tools available for self-defense regardless of where they live or for whom they work. 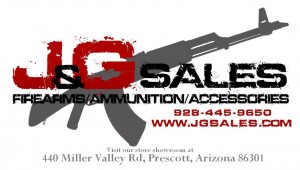