H&K has announced the HK45 Tactical for 2013. This is a pistol I’ve long been waiting for, in fact I’ve been trying to track down a .45 auto USP in the olive drab as well. This fulfills both desires of mine in one future purchase. This is long overdue and I’m not embarrassed to show I’m excited.

The firearm itself is as expected, basically an HK45 with a threaded polygonal barrel, Meprolight tritium dot sights, and an option of a colored frame. While the trigger can be changed to one of nine different types, it does not appear upgraded from the factory HK45 model. the pistol is assembled in the USA using US and German components. Like the HK45 it still utilizes a 10 round magazine; two rounds less than the USP-45 Tactical model.

However, the official press release contained this little image.

I personally feel H&K has a bad rap. I also find USA importation rules and USA laws have been historically bad for them; I’d likely be more cautious than they’ve been. As an example – I can see, from a business perspective, how the semi-auto MP7 would be a very risky venture. I’m just referring to cost to tool up, manufacture, and selling for profit.

With that out of the way, I’m very disappointed with the above image. The NRA has only recently changed their tune on suppressors, primarily due to the efforts of SilencerCo, AAC, and the ASA (American Silencer Association). I’ve even answered the phone, to “gun owners” that criticized the sale and use of suppressors. The common view is that they are used only for assassinating people. While animal poaching has been a real issue, I’ve never seen a news article about them being used this way. I don’t know the law enforcement stats on legal suppressors being used for this illegal activity.

H&K makes pistols designed to accept suppressors and are targeting an audience of people that own, plan on owning, or hope to own a suppressor to attach to their firearm. I personally grew attached to using suppressors on rifles first and pistols second, but in both cases it was a matter of hearing protection. A can (yes, I still call them that) works as better sound suppression than any hearing protection I’ve ever used, and without compromising a cheek-hold on a rifle stock.

I once worked for a company that had engineers making one product, executives explaining it as a separate product, and the marketing department putting out ads for yet a different product. All under the same name and with only one actual product in the works. Sometimes one hand writes print for a company while another does the crafting, and the head isn’t paying attention.

With that all said, I’ll still plan on buying one of these. I just found the press release caption to be disappointing. 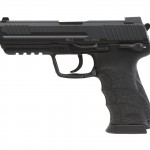 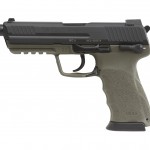 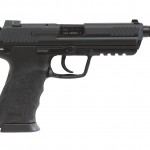 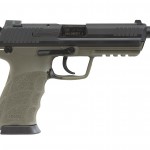 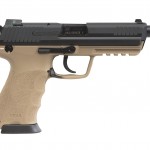