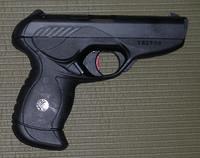 This is a basic field strip of the South African Vektor model CP1. The operation is similar to the H&K P7 series of pistols but the disassembly lever is located as part of the function of a unique safety inside the trigger guard. This slide take-down location is similar to the Walther PPK series of pistols but differs by pushing the safety all the way rearward instead of pulling the trigger guard down to disengage. All three of the pistols mentioned have a slide that is removed by pulling it all the way rearward off of the rails and then up and over the fixed barrel. Note the internal single-action hammer.

From the various sources we were able to find, it is believed there are approximately 300 of these pistols remaining in the USA. The rest of the 800 imported are believed to have been returned when the company existed the USA arms market. A feature of a future story I’m afraid.