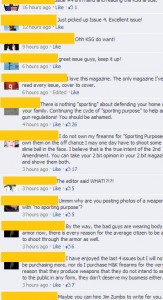 It looks like editor Jerry Tsai really shot himself in the foot, not literally, in Recoil issue #4. He has essentially admitted to agreeing with the past few decades of anti-gun legislation – citizens shouldn’t have “non sporting firearms”. This is a complete mockery of the second amendment.

To the left is a sample of the comments left on Facebook of their recent photo – an H&K MP7A1 that was featured in an article where Tsai stated, “…the MP7A1 is unavailable to civilians and for good reason. We all know that’s technology no civvies should ever get to lay their hands on. This is a purpose-built weapon with no sporting applications to speak of.” The emphasis is mine. The backlash is easy to predict and evident with how many readers announcing they will no longer purchase or read Recoil magazine. I tried to stay impartial and ultimately realized I cant ever be. I am not even remotely interested in “sporting firearms”. I also have to consider this came from a magazine catering to an audience partial to infantry small arms.

UPDATE 2012 September 09 (afternoon): Tsai has responded with further fallout fodder. In some ways I find this more disturbing because it shows that he doesn’t understand ammunition, assault rifles, or his target audience. Should I also be talking about H&K? Probably, and I plan to, but in a future break-down.

Hey guys, this is Jerry Tsai, Editor of RECOIL. I think I need to jump in here and clarify what I wrote in the MP7A1 article. It looks like I may not have stated my point clearly enough in that line that is quoted up above. Let’s be clear, neither RECOIL nor I are taking the stance on what should or should not be made available on the commercial market although I can see how what was written can be confused as such.

Because we don’t want anything to be taken out of context, let’s complete that quote and read the entire paragraph:

“Like we mentioned before, the MP7A1 is unavailable to civilians and for good reason. We all know that’s technology no civvies should ever get to lay their hands on. This is a purpose-built weapon with no sporting applications to speak of. It is made to put down scumbags, and that’s it. Mike Cabrera of Heckler & Koch Law Enforcement Sales and veteran law enforcement officer with SWAT unit experience points out that this is a gun that you do not want in the wrong, slimy hands. It comes with semi-automatic and full-auto firing modes only. Its overall size places it between a handgun and submachine gun. Its assault rifle capabilities and small size make this a serious weapon that should not be taken lightly.”

Let’ also review why this gun should not be taken lightly. In the article it was stated that the MP7A1 is a slightly larger than handgun sized machine-gun that can be accurately fired and penetrate Soviet style body armor at more than 300 yards. In the wrong hands, that’s a bad day for the good guys.

As readers of RECOIL, we all agree that we love bad-ass hardware, there’s no question about that. I believe that in a perfect world, all of us should have access to every kind of gadget that we desire. Believe me, being a civvie myself, I’d love to be able to get my hands on an MP7A1 of my own regardless of its stated purpose, but unfortunately the reality is that it isn’t available to us. As a fellow enthusiast, I know how frustrating it is to want something only to be denied it.

Its manufacturer has not made the gun available to the general public and when we asked if it would ever come to the commercial market, they replied that it is strictly a military and law enforcement weapon, adding that there are no sporting applications for it. Is it wrong that HK decided against selling a full-auto pocket sized machine gun that can penetrate armor from hundreds of yards away? It’s their decision to make and their decision they have to live with not mine nor anybody else’s.

I accepted their answer for what it was out of respect for those serving in uniform. I believe that we as gun enthusiasts should respect our brothers in law enforcement, agency work and the military and also keep them out of harms way. Like HK, I wouldn’t want to see one of these slip into the wrong hands either. Whether or not you agree with this is fine. I am compelled to explain a point that I was trying to make that may have not been clear.

Thanks for reading,
– JT, Editor, RECOIL 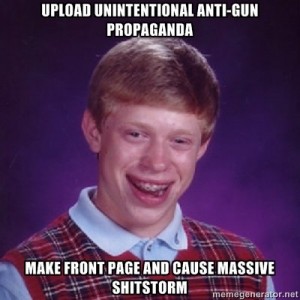 UPDATE 2012 September 09 (evening): Forums and boards Subguns.com, Sturmgewehr.com,  & AR15.com are also talking about this. Moderno.com has also posted a good review of why the community is upset. The most significant response comes form SilencerCo and SWR, they have done what we can’t, which is to pull out advertising dollars from Recoil. I applaud SilencerCo’s decision on this matter.

UPDATE 2012 September 09 (near midnight): Tsai has posted an “apology” on Recoil’s website. It passes the blame, and in doing so, further shows he does not understand why this is so upsetting. I believe he is sorry, but not for the reasons necessary for acceptance.

You will see a lot of Zumbo remarks in the comments of many of the above links. Jim Zumbo is a firearm magazine writer, avid hunter, and former spokesman for Remington. He specifically called for the ban of assault styled weapons for hunting and also refered to them as “terrorist rifles”.