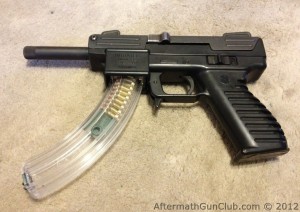 George Kellgren designed the Tec-9 by using the Carl-Gustav M/45 “Swedish K” as major inspiration. Sweden, turning further into a pacifist country, had no interest in the new machine pistol. Intent on making it as a paid gun designer, G.K. moved to the United States. With Garcia they started Intratec and sold the flagship Tec-9. I agree with The Firearm Blog that Kellgren was ahead of his time by making a less expensive .22LR version of a firearm that was already selling well. That is, if Kellgren was even still with Intratec at that time.

The video’s audio is off but it has no ill impact on the show of simplicity.

This pistol made the news recently when a young Mexican congressional candidate posted a photo (see image below) of himself posing with what appears to be a Sport-22 (also marketed as a 22 Scorpion) on his Facebook page. He showed ignorance in several ways, and I don’t just mean the poor trigger discipline, he wrote that the firearm was a 9mm Uzi. It isn’t, too be fair “Uzi” in Mexico is synonymous with large tactical pistols, anything that looks like a machine pistol. Nine millimeter is not a legal caliber for a civilian to own in Mexico, like many South and Central American countries, civilians can’t have the same calibers as Military or Law Enforcement. The most serious offense is not having registered the pistol if he is in fact the owner. I didn’t follow up on the news report when it spread through the gun blogs last March. It is only relevant to me now.