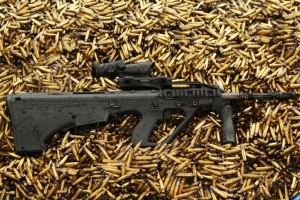 MSAR has announced they have completed their live fire test of the new STG-E4. Aside from removing the Soviet caliber offerings and replacing it with the .300BLK*, what is different from the new STG-E4 over the last E4 series? I’m not personally even sure the .300BLK is such a great idea. On a bullpup your ear is right next to the chamber explosion and this isn’t comfortable even when suppressed. Much to the disappointment of several friends experimenting with suppressing the KelTec RFB in .308WIN.

MSAR has a longer version of the above video on their website.