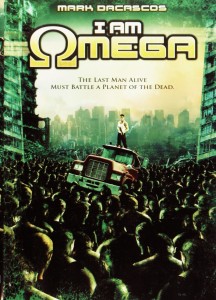 This movie follows in the footsteps of a long line of “last man on earth” movies. Literally. I was watching this movie and I kept thinking of the Vincent Price flick. I felt very bi-polar while watching this movie. I really liked the first part of the movie, and I was drawn in to believing that he was truly the last man on earth. Mark Dacasos (Renchard) played up the crazy bit very well. He kept popping pills like they were candy and he hallucinated hearing the radio come on at one point. There are also scenes where he is interacting with mannequins and dead zombies that he’s set up in order to have conversations with them. This is fantastic and really drives home the point of being isolated and not having any other humans to talk to. For the first thirty minutes I really believed he was the only one left alive in the world and that he was slowly going insane. I was excited as I wanted to see his sanity degrade.

Even the incoming messages on his computer were something that I thought he was creating in his head. I was very disappointed when I found out that he was actually getting the messages. There was a woman stuck in the city that was contacting him for help.
She apparently is immune to the infection that turns people into zombies. She asked him for help and he said no.

After this is when the movie becomes very bi-polar. It’s the depressive phase, as the first part was the manic phase.
He’s not really all alone. He gets a visit a few days later from two guys who are headed to the city to rescue the girl and they want him to be their guide.
The dramatic drop for depression occurred when they convinced him to go along by blowing up his personal fortress with a rocket launcher. This raised so very many questions. If he was special ops in the army before everyone died, how could he let them do that? And where was his extreme paranoia when he really needed it?

The rest of the movie was really anti-climatic. He goes along tp help rescue the girl. They blew up his house so what’s a guy to do after all? Army guy Mike dies and Vincent stays behind to make sure that his friends’ body doesn’t get eaten. Then Vincent comes back later and takes the woman hostage because he doesn’t really want anyone to be protected. He likes the way the world is now. He leaves Renchard for dead and takes off with the girl and dead Mike.

Renchard of course pulls it together to be the vengeful hero and chases them down. Just in time to save her from the advances of the dead guy. If you watch the movie you will understand what I mean.

Then the movie ends with Renchard and the girl kissing and heading on their way to the rendez-vous point so that the army can create the vaccine.