Brownells announced they’ve sold 3.5 years worth of magazines in 72 hours. As the announced article suggests, this sort of panic buying can crush a small store and cause rationing. One of my own local shops is considering temporarily laying employees off because there isn’t anything to buy which results in nothing to sell. 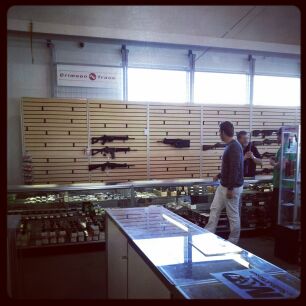 After the news media gale of proposed gun bans and who-said-what, Tuesday evening and  Wednesday morning’s buyer’s rush left stores almost depleted. Members of AGC (Aftermath Gun Club) in Phoenix and parts of Utah reported an absence of semi-auto carbines for sale by noon that day. Back inventory depleted and the remaining vestiges left on the wall like unwanted orphans against the fence.

To further incite worrisome human behavior, high-capacity magazine prices had been raised in many places, causing even more panic buying of accessories on the interwebs. So much, companies like LaRue stopped accepting orders for them. MagPul even issued a response to the price hikes. This caused another large wave to local stores and within a single day sales spiked far above a normal month’s sale. Because of this, Brownells online sales don’t seem shocking and I don’t doubt the figures.

With the anti-gun media bias increasing their overall tantrum, Cerberus Capital Management announced it would be selling off The Freedom Group. TFG is their subsidiary which includes Bushmaster, Remington, DPMS, AAC, among many others. I rolled my eyes with this announcement, as they’d tried to take the company public repeatedly with much failure to be heard. Also, some investors are fairly liberal including teacher’s unions.

Utah local news KSL.com announced they had discontinued firearms classified ads. Cheaper Than Dirt announced it would discontinue firearms until further notice. As a supplier of militaria, surplus, firearm accessories and more recently) firearms I’d imagine they’d be more immune to the news issues but maybe they became discomforted with how fast their inventory was turning a profit. WalMart also pulled some semi-auto firearms from their future inventory (good news for small shops that were being under-cut by Ruger and SIG Sauer).

Mike at ENDO (Everyday No Days Off) pointed out a few more, including Dick’s Sporting Goods, NBC dropped the FN sponsored show 3-Gun Nation (which I’d been meaning to get around to watch), and Discovery dropped American Guns.

When a president takes a second term, it has been notable they serve their contributors more than their constituents. With fears of the current president using his next term to wage war against arms sales and individual ownership and media (pro and anti alike) quoting and misquoting some of Obama’s recent anti-gun comments, we have the beginnings of some panic buying. Sales always go up towards the holidays but in an election year it is elevated. You can thank the 1994-2004 Assault Weapon Ban for much of that. Gun owner’s worry about another attack on these firearms. Not because they worry about being able to buy them, the changes will be mostly cosmetic, but because the cost will increase significantly. Then, with the Colorado murders fresh in our memories, we have the murders in Connecticut. Media starts predicting the leftist response, again both the pro and anti crowds voicing up at this point, and then you have some real things spoken. The ever ineloquent Feinstein on the top of that list. Gun owners seem to forget that she speaks up on this issue regularly, and while it may have more momentum now, her proposals rarely get anywhere. In fact, she announced her plans well before the Connecticut shooting.

I don’t have a primary focus point here, I’m more reporting on the current state of industry. While I may be entirely wrong, my view is unpopular with many peers, I believe 2013 will be mostly noise. As a lesson learned, plan ahead, and quit procrastinating. For all of you new to prepping and emergency storage, a suggestion, stock up on toilet paper.

As soon as I published this, I noticed The Firearm Blog posted a photo gallery on the same topic, stores selling out. Check it out.