A friend of mine gave me a warning not to watch this movie. I asked for a paragraph summary. 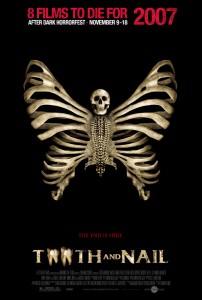 A group of young people led by a “professor” take sanctuary in a hospital after most of the population of the world has killed itself off. The cause is explained by oil running out in the year 2012. A young woman joins the group and soon they are set upon by a roving group of cannibals. Acting is terrible. “Cinematography” is terrible. The characters aren’t believable in both the sense that these people somehow survived in the first place and that they would act as they do in the environment they find themselves: A couple is seen briefly having vigorous sex when they are supposed to be preparing to escape the hospital because the cannibals are on their way to attack them.

The only redeeming quality is the possibly unintentional send up of “Newt” from Aliens. They really do “mostly come out at night…mostly.”