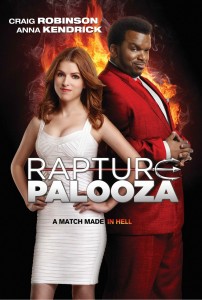 With a name like Rapture-Palooza (The Ecstasy) you would think that this might be a funny movie. And really it was rather silly and kind of funny. The best part would probably be the over the top awkwardness of Craig Robinson as the Anti-Christ, but I’m getting ahead of myself.

A quick summation of this movie:  girlfriend, Lindsey (Anna Kendrick) and boyfriend, Ben (John Francis Daley) are having a normal life, suddenly a good portion of people are raptured up to heaven. They are left dealing with all the inconveniences of living during the time after the Rapture:  Brimstone falling on people. Blood raining from the sky and Wraiths. But they continue on trying to get their sandwich cart business up and running, until the cart gets destroyed by a fiery rock. So they decide to go work for the Anti-Christ (Craig Robinson) until they can replace their sandwich cart.

Parts of this movie were funny because they were a bit unpredictable, like the fact that all the Wraiths eventually end up being potheads, and then Lindsey’s mom being the only person who is kicked out of heaven for starting a fight because someone cut in front of her in line.
Although, I had to wonder why the other person who cut in line didn’t get sent back. But maybe line cutting is allowed.

Overall, I liked this movie but if you don’t like irreverent movies, you will want to steer clear. Lots of sacrilege awaits you if you watch this movie. That, and the “Beast” gets really filthy with his language when he is trying to seduce Lindsey, but I guess that is what you would expect from the Anti-Christ.

I’m not overly Ecstatic about this movie, but it was worth a good laugh on a Friday night when you’ve got nothing else to do but watch something different than an action flick.

Oh and the soundtrack was pretty good.

This is the “red band” trailer, so expect some colorful language.