Through the entire film I was frustrated the KRISS Vector SDP pistols had absolutely zero sight systems on them. Just a Picatinny rail to mock marksmen for paying to watch the film in 3D.

I saw this in the theater. I knew, before making the decision, it wouldn’t make any plot sense. Sure, if you are fifteen – you may connect dots and extrapolate meaning. Literature professors and faux-intellectuals have been doing the same thing with Finnegans Wake* for over half a century. 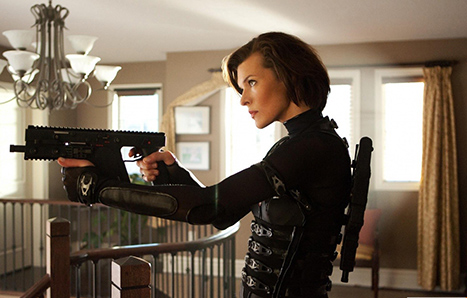 Unlike the James Joyce “classic”, Resident Evil 2012 (may I just call it that?) deserves to be remembered. I want to be clear here, I watched this stupid movie, with its  condescendingly confabulated plot, and it was bearable because Milla Jovovich was that much joy to watch. If you don’t like to stare at Milla for two hours, never ever watch this movie.

* “…its abandonment of the conventions of plot and character construction.” Wiki on Finnegans Wake